For I know the plans I have for you, declares the LORD, plans to prosper you and not to harm you, plans to give you hope and a future. - Jeremiah 29:11

Does Your Wife Want OUT?

Reconnect With Your Wife, Gain Peace, and Build Character With Powerful Support & Guidance

Founded by Randy Pryor, Hope For Separated Husbands offers support, tools and resources that help men learn "what to do and what not to do" during one of the most devastating times of their lives. If you’re a man struggling in your marriage or even working through a separation or divorce, join my mailing list now for valuable free advice, tips, and encouragement. You are NOT alone.

Who is Randy Pryor? 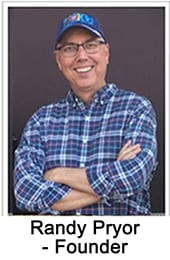 I used to be a comedian on cruise ships. But, when my wife and I wanted to start a family, I switched to working on land so I could be home. My wife asked me to help around the house - often, but instead, I’d put in extra hours to pay for a house keeper. (It seemed logical to me.) But, after 14 years of marriage, she was done. She had finally had enough of my workaholism, selfishness, and controlling ways. She told me she didn’t love me any more and asked for a divorce. I was stunned.

The pain was worse than being kicked in the family jewels.
(Which, as you know, even when we’re not using them, still really hurts.)

I wanted to reconnect with my wife and repair our marriage. But, she no longer loved, trusted, or respected me. And I felt like a complete failure as a husband, and as a man. s She immediately moved out and filed for divorce. Suddenly, my little family was being ripped apart in front of me and I had no idea what to say or what to do to change it. Fortunately, my church had a support group for separated men where husbands learn how to treat their wife the way God intended. (At that time I thought all churches had this kind of program, but, I soon found out that theirs is the ONLY one of it’s kind!) So, I joined the group. Each week I learned what I call “gold nuggets,” new ways of doing things that I should have learned years ago. I was still in a lot of pain, but it got better and better each week. That’s when I realized that the secret to relationship success was learning new, specific habits, based on
God’s wisdom. I also learned that...

The ONLY way for a husband to reconnect with his wife is by learning these new behaviors.

But, most importantly, I stopped focusing on my issues and started focusing on my relationship with God. I not only learned that I should put my wife first in our relationship (duh), I also learned exactly how to do that. I learned about simple things I should have been doing all along. So, I started doing them. She was not only unimpressed, the nice little things I did for her were about as welcome as a hair on a biscuit. But, that didn’t matter, I was feeling better each day. 1 Peter 5:7 says “Give all your worries and cares to God, for he cares about you.” And, that’s exactly what I was doing. And, as a result of my “new normal,” I was no longer in any pain. In fact, I felt better than ever! Six months after I joined the support group they asked me to become a leader and help other guys get through it, just like I had. So, since 2010, I’ve been blessed to be able to help hundreds of guys go from being absolutely broken, to having new lives filled with hope, purpose, significance, and happiness - whether they reconcile with their wife or not.

Would you like to feel hopeful, and happy again?

From what I’ve personally seen in the last 10 years, ALL of the husbands that reconnect with their wife, give 100% of the credit to the new habits that they learned from the program.

That’s why I created Hope For Separated Husbands - to share what’s worked for me, and hundreds of other husbands, no matter where they are. Here’s what most guys typically do to try to get through their separation - you read a whole bunch of information online and hope you remember some method or tactic you can use on your wife so she’ll change her mind and lighten up. Here’s why that’s hard - you have NO control over your wife or what she’s thinking or what she’s been feeling for probably a very long time. And, unless its based on God’s wisdom, it’s just a big hodgepodge of ineffective theories and ideas. Some of which could be really disastrous to your relationship. With Hope For Separated Husbands you’ll be able to get REALLY healthy, once and for all, and that just happens to be the single most attractive thing you can do for your wife. And there is absolutely NO downside to becoming the man God wants you to be.

Is Life Coaching the same as Therapy? No.

Athletic coaches are usually people who excelled in their given sport. Similarly, Life coaches are usually qualified as trusted advisors because of their real-life experience. Typically, therapy sessions are held weekly, at a therapist’s office… usually with no support in-between sessions. On the other hand, Life coaching is more about continual, frequent support and guidance, usually via phone, or video conference, especially during a potentially life-altering event, like separation or divorce. These days, almost everyone can benefit from consistent coaching and continual feedback.

Can you have both a life coach and a therapist?

Absolutely! They are complimentary to each other. With 10 years of personal experience, I can coach on many aspects of life. However, I specialize in the following areas:

“I was a lost and broken man. I learned how to work on myself with God leading the way and guess what, it worked! I now have a stronger relationship with my wife than I ever had and we’re falling in love all over again.” - Matt B." “Randy tirelessly worked with me to bring me 'back to life' from where I was after my divorce. He genuinely cared about me and poured time and prayer into my life to help me get back up on my feet. His wisdom and experience was instrumental to my recovery. I not only consider Randy a mentor but also a life-long friend." - Jonathan L.